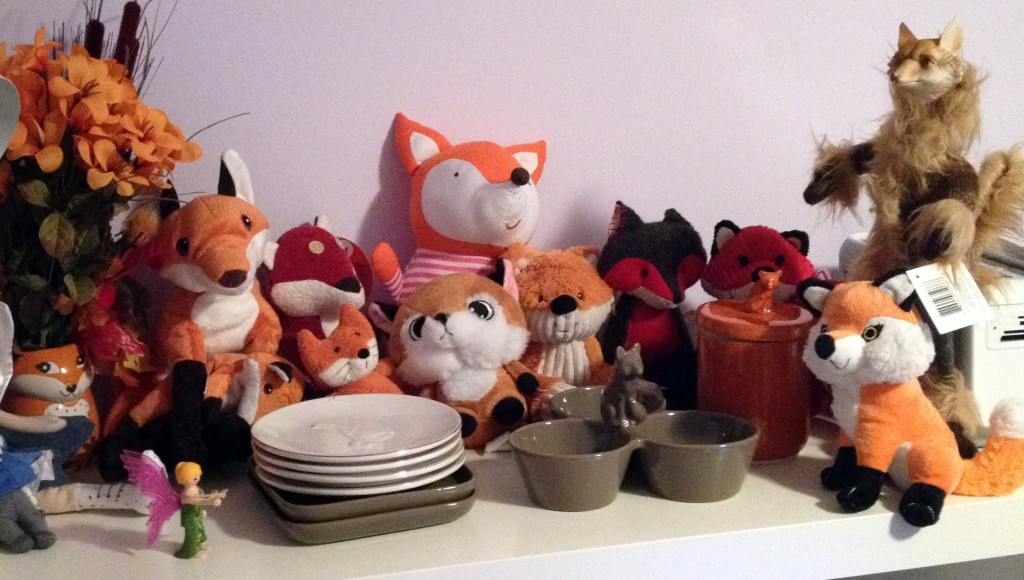 You may have noticed an increase in fox popularity recently. There’s been quite a wave of trendy forest critters over the last few years. For many a year the owl has been seen in fashion, accessories, stationary, home decor, jewellery and pretty much everywhere. I think the owl is still going strong but it’s slowly being over taken by the Fox.

Personally I’m a huge fan of the fox. For the past couple years I’ve been keeping an eye out for anything that bares this woodland creature. I’d find the occasional little fox bookmark or necklace and snatch it up without thinking. But 2013 I had quite the selection of fox apparel, toys, jewellery, iPhone cases and even music! So I went a little fox crazy and collected a lot of items. There’s a bit of a fox shrine in my office (see photo on left) where I happily gaze at my 12 fox stuffies who gather around my beautiful fox mug, candy jar and dishes.

I think Old Navy has caught wind of this trend for a while now and released several fox sweaters and best of all fox socks! I admit I own like 10 pairs. Fox socks! Genius!

So what is it that makes the fox so attractive? I think its sharp features, sly look and vibrant colouring get the attention of many. To me the fox represents the wilderness. Running free through the forest, hunting and silently watching through the trees. The fox is beautiful. The hit song “What does the fox say” by Ylvis is proof that people also find the fox very mysterious and curious. You probably already know that the fox makes a screechy/squawking sound. It’s weird. But that’s seriously what the fox says. 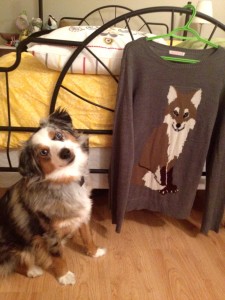 Fionn and my favourite fox sweater

This animal has become so trendy that Russia is breeding domesticated foxes and now selling them in North America. Say what?! Crazy! I don’t know how I feel about this as I admire the fox for its wild qualities but again this proves how crazy people are going over foxes. My own two pets both seem to have qualities that are very foxy. Their movements and facial expressions are so similar to that of a fox that perhaps that’s why people could think of them as a pet. They are kind of like cats but bigger and more doggier. Does that even make sense?!

Where does the fox fit into the faery world? Well there’s David the Gnome who is friends with Nimble and Swift. They allow David to ride on their back and help transport him across the forest. There’s a lot of artwork I find on Etsy and Pinterest that incorporates the Fae and their woodland friends. The fact they are a creature of the forest makes them very magical and no doubt they are working with the faeries.

Top 10 Foxes of all time!
(In no specific order. Just off the top of my head)

If you think of anymore please post in the comments! I got the hunny buns to help make this list with me. This list basically tells me we need more Foxes!!!

After reading my post you’re sure to notice more and more foxes out in the world. My friends lately have been sending me fox links and think of me when they find anything foxy. It’s awesome!

Have a foxtastic week 🙂

Hello, it's me again! I know it's been a while but I really hope you all had a beautiful summer filled with blooming...

END_OF_DOCUMENT_TOKEN_TO_BE_REPLACED

Under the Ivy is a little faerie shop located in England. I discovered the shop online through Etsy and couldn’t believe my eyes!