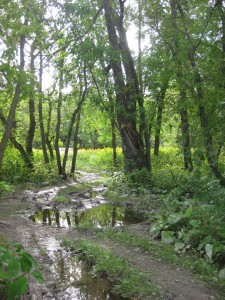 There are people who have great attention to detail and notice things that others most likely would overlook. I’m one of those attention to detail people. It’s a characteristic that I can thank the beautiful forest path for. The forest is always changing but certain things remain the same and those are the details I’d remember. The shape of a tree or a rock formation would remain the same even throughout the changing seasons. I’d use these constant shapes as trail markers. It helped me know how far a long the trail we were and what was coming up next.

Walking down the trail there would be one section shortly after the Deer Stands that would be one of my forest markers. A gathering of trees that resembled a giant gate that the trail passed between. It seriously looked like it was remnant of an ancient Elf settlement and now I think of it as something right out of Lord of the Rings. When we reached this gate I knew if I looked straight through it towards the west I’d see Big Rock in the distance. Another marker ahead.

I wish there was a photo of it but I never shared this little marker with anyone. Later on I mentioned it to my Dad but I don’t think he realized how much it stood out on the trail for me. This is a photo of a fishing spot my family visited one summer day that has a similar gate feel to it. It’s not as majestic as the one on our trail though.

Markers aren’t just found in the forest but also around the city or on your drive home from work. Another one for me is when I pass by the field where the Canadian Geese are sitting on their nests and I know I’ll be home in less than 5 minutes. When you notice these little things it makes your journey all the more memorable.

Lesson Learned:
There are many checkpoints along the way that you can choose to acknowledge or rush past.