A Fairy Happy Birthday with The Forest Fairy

This past October I was asked to attend a fairy themed birthday party my friend was throwing for her two daughters. The invite was a little different as I was not going as a guest but the entertainment. What is a fairy party without a real fairy?! My friend knew I already had the outfit, accessories, glitter and wings ready to go and asked me if I would dress up and add some magic to the party. How could I say no? 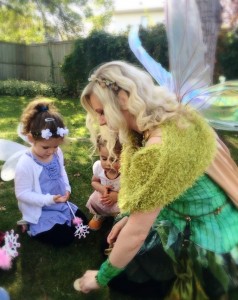 Learning how to be a fairy

We planned out the order of events a few days before the party and I prepped my outfit to make sure everything was perfect. If I was going to be a fairy I was going to go all out and be the best one these kids had ever seen! There were a lot of special details I put into my outfit from the pointed ears, penny whistle, a pouch full of leaves and acorns and a whole lot of green glitter!

It was all very fun getting ready and having my mom drive the “fairy mobile” to the party. She parked down the street so nobody saw me pull up in a car because everyone knows fairies fly to birthday parties! It didn’t really occur to me how strange I probably looked until I started skipping down the street and a few of the neighbors did a double take as I passed by. Then I got to the front door and I nearly froze.

The door opened and little Jade (3) and Alex (1) were there to greet me with massive smiles and laughter. I trilled a note on my penny whistle and all of the other fairies instantly came running to see me. I introduced myself as “Sarah The Forest Fairy” but my name soon became “Fairy Sarah”. I guess it was shorter and easier to say. I loved it! 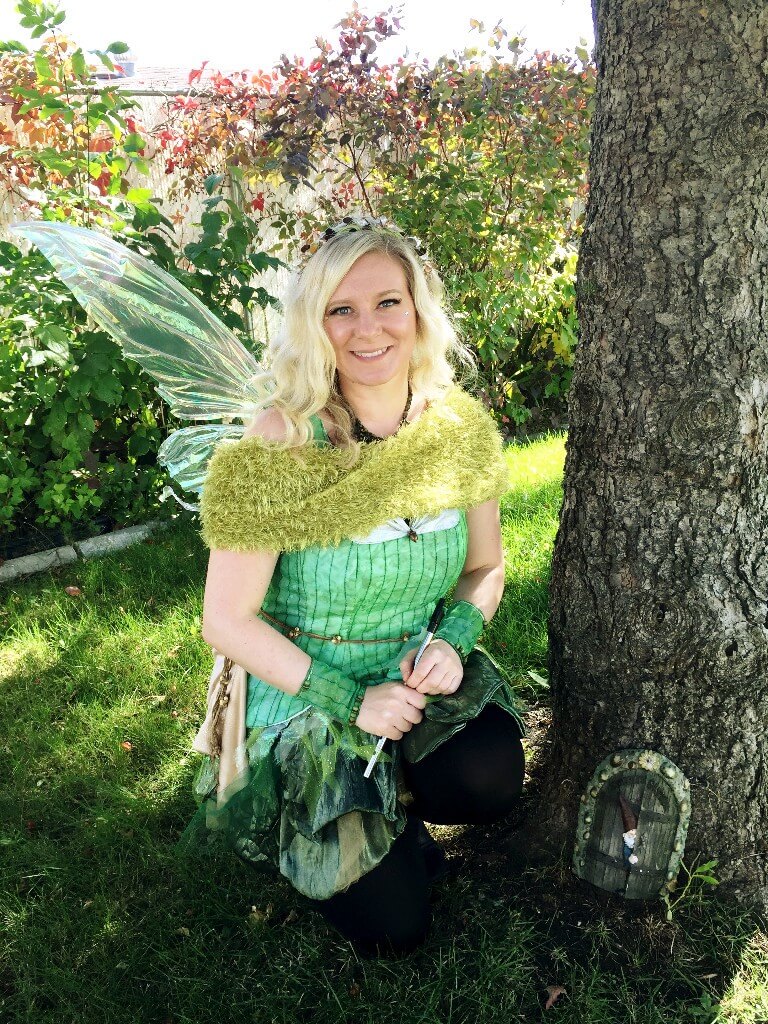 We all gathered in front of the fireplace and I handed out magic wands to all of the little fairies. They already had their fairy wings on and by the end of the party the plan was to transform them into real fairies! I taught them how to make bubbles disappear with their magic wands. Then I presented the birthday girls with their own special flower crowns.

It was a gorgeous sunny autumn day and we couldn’t resist flying outside to dance in the fallen leaves. I sprinkled pixie dust in their hands which then we made a wish and let it blow away in the wind. We talked about the changing colours of the leaves and I attempted a little magic trick by changing the leaves in my pouch from green to gold. I think it worked? There were a few other surprises in my pouch like little dew drop gems and acorns. I handed a few small treasures out to the little fairies which most would not put down for the rest of the party. They thought they were the most precious things they had ever held. That was a special moment.

Having experience teaching ballet to preschool children I thought it would be fun to teach them how to dance like fairies. We flew around the yard and then hid behind a big tree but all of our wings were sticking out so we were easily found! As we were winding down we stuck jewels on our cheeks and another sprinkle of pixie dust for good luck. Some lovely photos were taken with all of the fairies and my job was done. I played a little trill on my penny whistle to say goodbye and skipped back down the street to the fairy mobile that was patiently waiting for me.

I remember just sitting in the car in such a daze for quite a while. I could barely even describe what I had just experienced as it went by so quickly. Since I’d never really played a character like this before I was just replaying all the moments of laughter and wonderment from the little fairies. It was a magical day that seemed so effortless because everything I did was just me being me. I was thrilled to have been a part of their fairy special day!

END_OF_DOCUMENT_TOKEN_TO_BE_REPLACED

It's that time of year again when we celebrate a beautiful day dedicated to the fairies! Fairy day is a holiday...